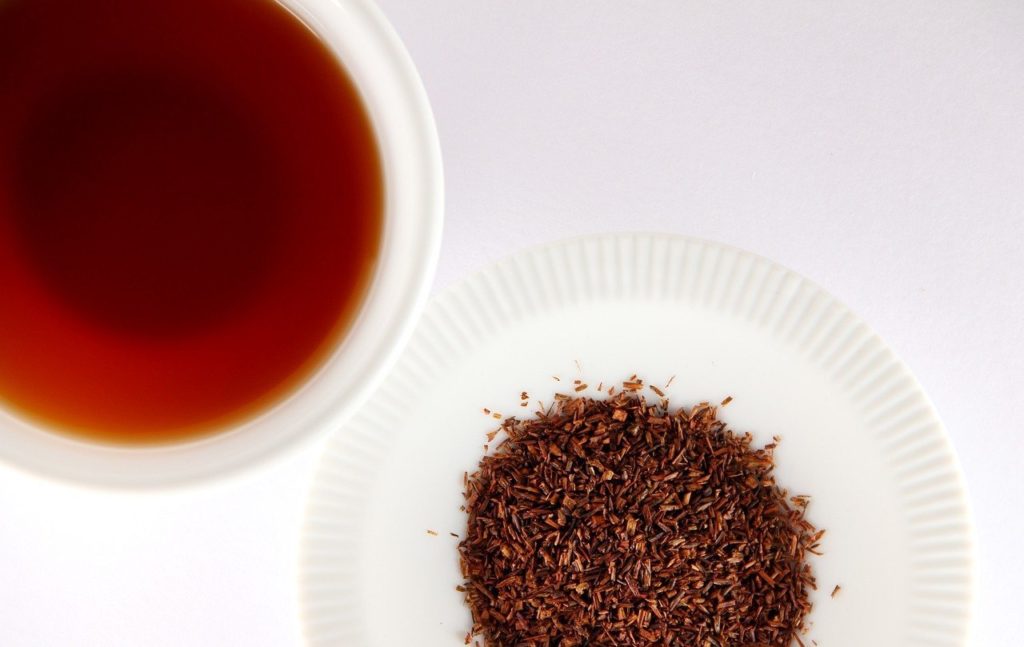 Drink Rooibos tea?
I was weaned off the breast with Rooibos tea. And from that time on would not be pacified unless I had my three “botties” in tow. One was milk, one was fresh orange juice, and the third was pure, unadulterated rooibos tea, no milk, no sugar.

I now drink it from a mug though.

Turns out almost every mother in South Africa was privy to this folk remedy. Today it’s a legitimate herbal remedy, with far more benefits than a mere substitute for mother’s milk!

Research is discovering how rooibos tea, also called Red Bush Tea, may combat lifestyle diseases like diabetes, obesity, diseases of the digestive system, inflammation and heart disease. It has been used by millions to ease conditions like asthma, eczema and colic.

Rooibos contains no caffeine or harmful stimulants, is low in tannins and full of antioxidants. And a host of phytophenols, in the form of flavonoids.

Red Bush Tea is 100% safe and beneficial for babies and pregnant moms.

Here is our detailed guide:

It has shown great promise in the cosmetic world too. And may have potent anti-aging properties that could reduce wrinkles, improve skin and hair and boost the immune system.

This little plant, endemic to Cedarberg, a small area in South Africa, is now gaining a worldwide reputation as a plant with medicinal, cosmetic and culinary uses.

What Is Rooibos Tea?

Rooibos, pronounced ROY boss, is a shrub that grows in only one area of the world. It gets to 6ft (2m) in height and between 3-5ft wide. It has multiple stems and small, yellow, pea-shaped flowers. Flowers are produced in spring or early summer.

Rooibos tea is the infused beverage made from the leaves and stems of the plant, Aspalanthus linearis.

It has a rich history and a unique nutrient profile. The South African Rooibos Council (SARC) has been meticulous in promoting and protecting this valuable plant. So anyone buying this excellent tea can be assured they are getting the “real McCoy”. They keep strict standards, and the finished product has to have less than 10% moisture content.

In 2013 legislation was passed to protect the naming rights of “Rooibos”. This further protects the integrity of the finished product as it stipulates that only plants grown in the specific region of the Cape can be called Rooibos Tea and boast the healing properties found in rooibos.

Why is it called Rooibos?

The word rooibos is an Afrikaans word which directly translates into the red bush (rooi + bos). As such, rooibos tea is also known as red bush tea. This is because the fermented (oxidized) stems and leaves of the Aspalanthus linearis go from bright green to a rich, reddish-brown after processing.

They mostly harvest Rooibos once a year between January and March. The plants are harvested 50cm above the base. Each plant has a 6-year lifespan and is ready for its first harvesting after 18 months. New plants are grown from seed, which is also collected by hand. Cuttings are also a viable propagation method.

It is almost impossible to grow this plant anywhere else in the world, specifically on a commercial basis. It has adapted to harsh dry conditions, unique to the fynbos biome, and is drought resistant.

It is a dry land crop and therefore needs no irrigation, although when grown commercially irrigation is carried out, as is fertilization. But the use of pesticides is frowned upon due to the specialized nature of this Cape Floral Kingdom. Here again, robust efforts have been made to make Rooibos a sustainable, ethical export.

The soil it grows in is nutrient poor, acidic and arid. The climate is typically Mediterranean in that it receives winter rainfall and can withstand extreme temperatures that go from sub-zero in winter right up to over 40°C in summer.

How Is Rooibos Tea Made?

Aspalanthus is a large genus (over 200 species), but linearis is the only species that are commercially cultivated. The needle-shaped leaves and stems are dried and cured. Rooibos is harvested by hand and then tied into bundles. From here it is transported to the various tea courts (there are over 80 Rooibos tea courts in South Africa).

At the court, it is cut by machine, but the fermentation process is still done the traditional way, by piling the cut, bruised plant matter into large heaps. Then it is watered and allowed to ferment. This takes about 12 hours.

Once the leaves dry, they get shaken loose from the branches. Then they get swept up and sieved. Traditionally, this would get done with grass mats. I’m sure they have changed this method slightly today, as the industry produces between 10 000 and 18 000 tons per year.

It is the enzymatic oxidation of the fermentation process that brings out the distinctive flavor  and sweet aroma of the tea.

Unfermented “green” rooibos tea is also available. Here the fermentation process is by-passed, and the tea is cut and then dried in the sun. Because the fresh leaves are sun-dried without fermentation, it is considered a herbal tea.

So Rooibos is special in that it can be called an herbal tea as well as a bona fide “black” tea.

The unfermented product is much higher in antioxidants and contains vitamin C., But the fermented tea contains enough polyphenols to be considered beneficial for a host of ailments.

Rooibos tea can be brewed and left to simmer for hours, without becoming bitter, as is the case with traditional tea made from Camellia sinensis. The longer it brews, the darker the color and the stronger the taste.

Margaret Roberts, South Africa’s very own plant guru, has written and published many books on plants and herbs for healing. In her book, Healing Foods, she listed following health benefits of Rooibos Tea:

In addition to this, it is also said to:

Rooibos may also be beneficial for people with:

These are known as lifestyle diseases. A direct result of a poor diet and not enough exercise.

Why does rooibos assist with these ailments?

The antioxidants and flavonoids in rooibos, as well as the low tannin content, make it.

These claims are not unfounded. A break down of active ingredients reveals a long list of powerful antioxidants and flavonoids. There is growing evidence that flavonoids contribute significantly to reduce the risk of heart disease and other illnesses brought on by aging.

And rooibos is loaded with them.

Rooibos has a unique profile of compounds. It is especially high in antioxidants and flavonoids, trace minerals and amino acids.
Chalconoids are aromatic phenols that give rooibos its distinct fragrance and flavor. As well as the lovely astringent feeling it leaves in your mouth.

The dihydro-chalcones, aspalathin and nothofagin are the most bio-active components in rooibos.

Flavonoids are broken down into the

Rooibos also has trace elements of

The amount of these trace elements, per teabag, are so negligible. And it is definitely the antioxidant levels that give rooibos its medicinal values. A synergistic effect must not be overlooked though.

Rooibos is taken as a tea. This is by far its primary application. According to Rooibos council, people drink over 6 billion cups of Rooibos tea per annum. Iced tea drinks made with rooibos are also trendy.

Rooibos and Colic in Babies

The antispasmodic action of Rooibos is what soothes colic in babies. It also relaxes them and gets them to sleep better.

It is the flavones in Rooibos, as opposed to the flavanols, that help combat indigestion, diarrhea and other digestive problems. The antispasmodic and anti-inflammatory properties relax muscles. This reduces symptoms like cramping and bloating.

Recent studies, conducted by Prof. Christo Muller of the SAMCR, found that rooibos could effectively reduce the symptoms of type-2-diabetes (T2D). It is the isolated aspalathin and nothofagin that combats diabetes. Diabetes leads to heart diseases.

Antioxidants boost the immune system and neutralize free radicals that damage cells and lead to more severe conditions. Antioxidants also boost collagen production, and this leads to plumper skin and the appearance of reduced wrinkles.

Aging comes with a host of ailments, but the potent and healthy antioxidants in rooibos could reduce and relieve many of these conditions.

Rooibos has diuretic properties. It also helps to relieve cystitis and other bladder and kidney problems.

HIV used to be an epidemic and has been curtailed with the use of antiretrovirals. A side effect of taking these ARV’s is kidney and liver cancer. Research is being carried out to see if Rooibos can be used to combat these cancers.

Cosmetic companies have invested time and money into formulating skin and hair beauty products, with Rooibos as the main active ingredient.

Rooibos is available in powder form, and this means we get products like

Most people make rooibos infusion (tea) and add it to their recipes. You can also bake with rooibos. Make cocktails or use it as a marinade for meat. South Africa is a nation built on BBQing. They call it “braais” in South Africa. Pronounced “brr” eye. Japan and America also consume a lot of meat.

For amazing recipes check out the Rooibos Council site

According to The South African Rooibos Council, over 100 research studies have been carried out in the last 60 years. South African Medical Research Council and Agricultural Council are the major institutions that conduct new studies on Rooibos.

Most studies have been done in vitro, but there have also been some in vivo.
The results are promising as they show potential of rooibos to aid in the prevention of lifestyle diseases which have become prevalent in our society through wrong eating and an increase in people leading sedentary lifestyles.

Thanks to the tea’s potential in the phytopharmaceutical community a lot of effort have been put into encouraging farmers and growers to produce organic Rooibos. Efforts have been made to protect the surrounding fynbos from exposure to pesticides. Most growers use organic nitrogen fertilizers.

Thanks to its commercial and economic importance Rooibos farming has to be sustainable, and a  is available online for any readers interested in the production and ethics of the rooibos industry.

Side Effects of Rooibos Tea

How To Make Rooibos Tea?

Rooibos is available in teabags, usually 2,4g per bag. It is also available as organic tea and “green” rooibos tea. You can also buy Rooibos as loose leaves.

The way you make and take your rooibos is a personal choice.

The best way to make a cup, according to the SARC, is to pour boiled water into a cup first and then add your teabag. Only 16% of rooibos drinkers make it this way.

If you use loose leaves, you can add 2-3 teaspoons to your pot. Add water and steep for 5 minutes.

The “old” way, used by the “Boere” in South Africa was to throw a handful of leaves into a big enamel pot and add water. They would boil this up and then let it simmer for a few hours. And through the day they would drink from this simmering brew. It got stronger throughout the day. And they take their last cup before bed, with a touch of honey.

Where To Buy Rooibos Tea?

It is quite possible that rooibos is available in your local supermarket. It is reaching more stores and shelves than ever before. And is exported to Japan, USA, Germany and Britain, among other places.

It is available at specialist stores too. And the range of Rooibos products, from tea to health products to beauty products are available online.

Cheers! It’s tea time, and I’m off to make myself a cuppa. (Rooibos, of course)